There is no way the Police should have apologised for this! 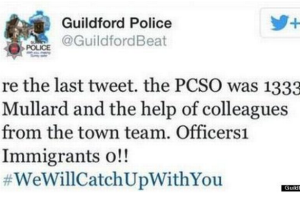 “Police have apologised after being branded racist for sending a tweet saying “Officers 1 Immigrants 0″. A Guildford officer sent it from Surrey Police’s Twitter account after eight illegal immigrants were arrested at a car wash in Burpham. The post was criticised by a number of Twitter users and was quickly deleted with another Tweet apologising subsequently posted.”

Why apologise? The Police are so politically correct these days that even when they DO good – as in this case when the apprehended 8 illegals –  they then grovel.