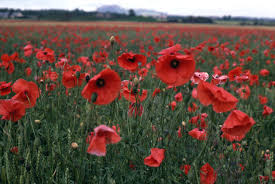 Budget retailer Poundland has been forced to review its dress code after a row erupted on Twitter and Facebook following claims that it had banned staff from wearing remembrance poppies.

In a statement on Facebook, Poundland said it was not against employees wearing a poppy, but they were not allowed to do so on the shop floor because it is not part of staff uniform. But the company said today that it will now allow workers to ‘use their own discretion in wearing poppies’ after hundreds of customers threatened to boycott its stores.

The store concerned was not far from me in Lisburn and it was only because outraged staff and customers USED the Twittterstream and Facebooked it that Management moved quickly to address the issue. Of COURSE people should be allowed to wear Poppies with Pride. My congratulations to all who besieged Poundland so that this wrong could be righted.

7 thoughts on “POUNDLAND TAKES A POUNDING…”