I was very touched reading of the visit by Pope Benedict XVI, chilled by the morning mist, to the ruined site of the World Trade Center in New York yesterday.

The Pope walked down a long ramp into the heart of where the World Trade Center had once stood and knelt in silent prayer before a "pool of reflection" at the memorial. He then lit a candle in remembrance of the 2,700 victims of the September 11 terrorist attacks who died in the streets and buildings all around him. Benedict called for terrorists to shun violence and find God. 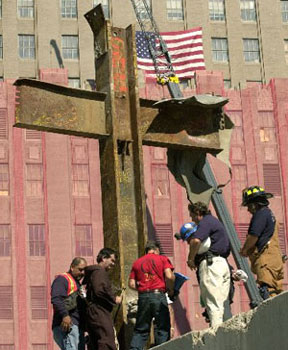 Judging by the comments of those who had their faith severely challenged through the loss of loved ones of 9/11, the Pope’s visit has brought comfort and that is good enough for me. Even though I have lived through years of terrorism here in Northern Ireland and seen what it does to the innocent victims, the scale, nature and locations of 9/11 still bring a sense of horror. Like so many reading this, I guess, I have stood at ground zero and have been struck dumb by the sheer emptiness of it all. What happened that day WAS  a declaration of war on us all – conservatives and  liberals – and it saddens me the unity that immediately followed has now been erased. But when all is said and done, it is the tens of thousands of relatives of those murdered by Islamic terrorists that day who have to deal with the aftermath on a daily basis, and so I join with all those who thank the Pontiff for his prayers.

4 thoughts on “PRAYERS AT GROUND ZERO”