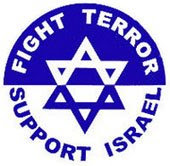 A word about those alleged peaceful activists bobbing about on the Flotilla of Hatred. Check out the video below as these “humanitarians” show their peaceful intent  by beating IDF soldiers to within an inch of their lives with metals bars, then they throw an IDF soldier overboard in a further act of extreme peacefulness; In truth they are vicious hate-fueled savages. The fact that the “International Community” unites to condemn Israel is predictable, if nauseating.

It seems to me that so much of the world wants Israel to lie down and let Hamas and their pals tramp them into the dirt. But the spirit and resolution of the Israeli people is admirable and I stand 100% behind them. ATW – PROUD to support Israel. That these floating fools refused the generous offers from Israel AND Egypt to take their aid to Gaza tells you all that you need to know. The refusal of the media to tell the Israel side of this is a scandal but then, as you may remember when Israel defended itself against the savages in Hezbollah, biased reporting is par for the course.

59 thoughts on “PROUD TO SUPPORT ISRAEL….”