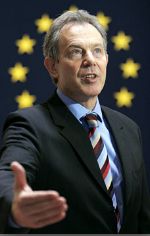 The verdict of history is that the Little Englanders were completely right about the common currency and the pro-Euro guilty completely wrong. A good time for the quislings to shut up, you might think. Not a bit of it. Tony Blair, demonstrating the front that comes only to a politician, believes that the time may yet still come for Britain to join the Euro.

These people speak only to confirm what mad, mediocre windbags they are. The battle is over, it was a rout. The question is whether there will be a Euro in future years. Interestingly, he states “I was always absolutely in favour of doing it politically and still am, by the way.” Reality, lives, liberty, national sovereignty and the iron laws of economics never do come into it for the power elite. So he wasn’t in favour of joining for any well-meaning (though misguided) reason, it was always the politics, the power to rule over the lives of others. Truly they are sociopaths.

10 thoughts on “REALITY MUST NOT INTRUDE”