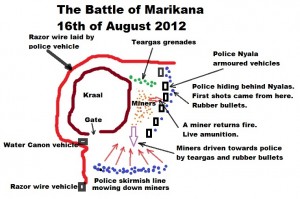 To the left is a kraal or camp of some sorts. The miners were driven towards there by earlier water cannons and rubber bullets. Once against the kraal fence, the Nyala armoured vehicles boxed them in with a funnel formation to the right. A vehicle laying concertina razor wire encircled them.

It is very clear from the footage available, especially the full Al Jazeera version, which was found to be the most helpful out of them all, that the police shot tear gas behind the miners and opened up with rubber bullets to drive the miners like a herd of lambs to the proverbial slaughter. The Al Jazeera reporter said that she could see how the police were boxing the miners in between razor wire and armoured vehicles and driving them like animals to their slaughter. Remember that this woman was probably never military trained, but it was so clear to her what the police was doing.

A miner then returned fire with a 9mm pistol that they probably took off a policemen they killed earlier in the week. This appears to be their only fire-arm they had.

Most of the available footage only shows the part where the miners appear to burst towards the police in what the media made look like an attack.

In fact the miners, armed with makeshift spears, were trying to escape from the teargas and the rubber bullets hitting them from behind.

When they burst through the “spout of the funnel” the police waiting for them in the skirmish line mowed them down with automatic weapons, pistols and shotguns and the media made it look like an attack on the police, when in fact it was a well coordinated cold blooded Police Turkey Shoot.

One thought on “Red is the new Rainbow colour”