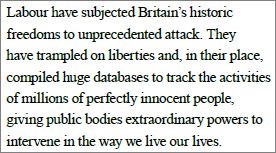 Well done Tory drones, you’ve been suckered again. Digital Dave Cameron spoke often about the surveillance state prior to the election, promising to roll it back and protect civil liberties. That’s what the Tories thought about it, on the left, from page 79 of the 2010 manifesto.

Roll forward a couple of years and Interior Minister Theresa von May thinks that all of our communications must be recorded, that the state must have access, and that if we disagree we must be on the side of terrorists and kiddie-fiddlers.

Well done Tory drones, you were suckered yet again. When will you learn that the major political parties are one LibLabCon party? When will it penetrate your thick skulls that nothing changes whoever gains power because they’re on the same side and advocate exactly the same policies?

10 thoughts on “REMEMBER WHEN THE TORIES WERE AGAINST THE SURVEILLANCE STATE?”