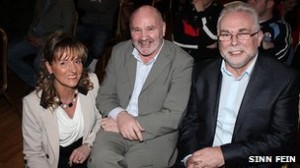 Paul Kavanagh served 14 years in prison for killing three people in an IRA bombing campaign in England in 1981. He currently acts as adviser to Martin McGuinness.

Here is one of his victims.

Thanks to the Legal Bill that Jim Allister has originated and that looks like it will now become law next week, Kavanagh may will be sacked from his VERY lucrative position as Special Adviser to McGuinness. As a point of further interest, Special Advisers earn up to £90,000 a year (Yes, you heard that right)

Given his pedigree of terror and his conviction for mass murder, one wonders what special skills Kavanagh has that attracted the attention of former IRA Commander McGuinness? Either way, such a person should hold NO such office in our government. Indeed the real debate is why other convicted terrorists are permitted to hold political office. But removing the likes of Kavanagh is at least one small step in the right direction.

34 thoughts on “RESTORING INTEGRITY TO POLITICS…”