SAVED BY THE GOLDEN ARCHES 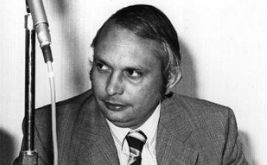 Sad to read of the death of George Ward, in my book a true hero of capitalism and British liberty.

The story of Margaret Thatcher’s war on militant trade unionism is well known. In a way it’s a story which began in 1976 when Ward refused to recognise trade union membership in his firm and sacked many of the staff who resorted to strike action. The Grunwick dispute, as it became known, lasted for two years and was over by the time Margaret Thatcher won the 1979 General Election. It was particularly bitter and often violent, but George Ward stuck to his guns and prevailed, sticking two fingers up to Lord Scarman along the way when he recommended that trade unions be recognised at Grunwick.

Seeing an honest and self-made man suffering injustice and violence, and in contrast to some of the spineless Tory old guard, Margaret Thatcher was a strong supporter of his while in Opposition. Looking back, it was a rather revolutionary time within the Conservative Party, though not quite the revolution which many communist trade unionists wanted to bring about. His obit notes that “having survived the strike, Ward built Grunwick into what, by the 1990s, was the largest privately owned photo processing laboratory in the world under one roof.” Let’s hope we have a few more George Wards out there.