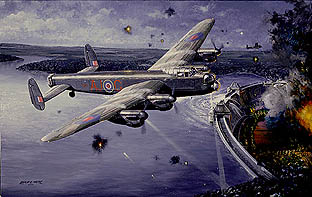 65 years ago today, the RAF’s 617 Squadron set out to destroy three dams in Germany’s Ruhr valley. They managed to breach two, giving a boost to Britain’s war effort. They have become immortalised as the Dambusters and their contribution to our winning the war effort was considerable. They were brave young men 65 years ago today but now, sadly, only one of the pilots remains and Sqn Ldr Les Munro was present today to watch the fly-over the Derwent reservoir. I note that there was a memorial service to remember those airmen who lost their lives that day …. along with their victims. Times change, eh? The last of the brave…