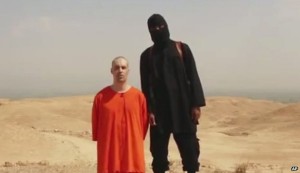 So, Islamists cut the head off another American journalist – this time James Foley.

The White House has confirmed that a jihadist video showing the beheading of American journalist James Foley is authentic. The Islamic State (IS) group released the video on Tuesday, saying Foley’s killing was revenge for US air strikes on its fighters in Iraq. The US, UK and France have expressed abhorrence at the video. Foley’s mother Diane said he “gave his life trying to expose the world to the suffering of the Syrian people.” President Barack Obama is due to give a statement later.

I have a few points to make;

1. WHY is anyone surprised at this? Time after time Islamic extremists demonstrate their savagery. They keep saying how they love death and yet some call them the religion of peace.

2. IS claim to have ANOTHER US journalist in captivity. Steven Sotloff has been threatened with the same fate UNLESS Obama changes his tact. What will he do now?

3. Prevarication has allowed IS to grow. The US attacks them (finally) and in a limited way in Iraq but the US stands back and lets them prosper in Syria. There is no strategy – just reacting.

It is hard to conceive what sort of person could cut the head of a fellow human being BUT those who do this betray their lack of humanity and as such have no place on this Planet. IS need confronted everywhere and pulverised. Talking won’t do it, diplomacy has no role, only massive high power military might can destroy them.

45 thoughts on “SAVAGE IS AS SAVAGE DOES…”