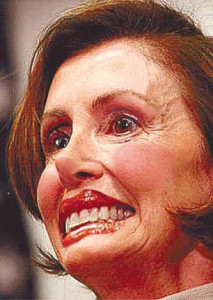 You can’t make this stuff up…

If Rep. Nancy Pelosi (D-Calif.) were to become Speaker again, she would work to pass a sweeping bill that would significantly expand federal childcare benefits. [WATCH VIDEO] (eewww she goes out on a Limb, Endorses Hillary, Say’s they can win the House “maybe”)

Atop her priority list as Speaker, she said, would be “comprehensive affordable, quality childcare” for working mothers, which she sees as a natural extension of ObamaCare. (she wants the children)
“That would have the biggest impact on women, families and … job creation,” Pelosi said. “That was on President Nixon’s desk … in the ’70s, and he vetoed it for cultural or whatever reasons. And now we have to do that again.”(another thing we can thank the old man for, god bless him) (but undaunted she wants those children)
Of a federal childcare law, she said: “This is the missing link in so many things that we’ve talked about. It is not exhaustive of all the things we want to do or have done with regard to women, but I do think it would unleash the power of women.” (yes just part with those yungins the Government will raise them for you)

This psycho wants to create a system that will compliment society by giving the State the role of parent from the instant they come from the womb. That is of course unless you choose to abort. In that case she will walk you to that line also. As any good Catholic would.

The best part. There are 1000s of Californians keep voting for her…. and we wonder why that state is such a mess… 🙂