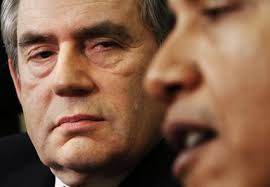 Iceland’s decision to push ahead with charges of negligence against its former prime minister, Geir Haarde, raises the not entirely frivolous question of whether it might be possible to mount a similar case against Gordon Brown.

Nevermind the alleged war crimes of Tony Blair, ruination of the British economy is a pretty serious charge. The case is quite easily constructed; that he did willfully take the brakes off public spending, that he failed to control the recklessness of the banks, that he stripped the Bank of England of its powers of financial supervision and gave them instead to a shiny new, politically correct but wholly inept regulator, that he misled parliament over the state of the public finances, and that he did gratuitiously insult the hapless Gillian Duffy. I could go on, but let’s not intrude too far into private grief.

In any case, all this would seem quite enough to put him behind bars. Yet as my colleague Ambrose Evans-Pritchard, has just pointed out to me, there is one overarching act of mitigation. He refused to allow Tony Blair to take us into the euro, which had it happened would have sealed our fate as surely as that of Greece, Spain and Portugal. The prisons are quite crowded, I’m told, so perhaps a non custodial sentence is in order.

15 thoughts on “SHOULD GORDON BROWN BE ARRESTED?”