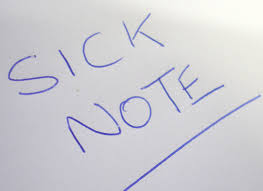 I’ll be on the BBC NI Nolan TV show this evening and we are debating this issue;

Sickness among civil servants has cost the economy more than £30 million in lost production, it has been revealed.  Last year workers took an average of 10.6 sick days, a rise on the 10.1 during the previous 12 months. Stress, anxiety and depression were cited among the most common reasons given for the absences.

It gets worse. Consider this statistic..

Even though more than half (52.3%) of staff had no recorded absence, over one-in-ten (10.4%) employees missed around three months (60 days) due to sickness with long-term sickness accounting for 70.7% of the total working days lost.

It gets worse still!!

Sick leave in Northern Ireland’s ENTIRE public sector cost the economy about £149m last year, the Audit Office has found.  Between 2010 and 2011, sickness cost the health trusts an estimated £73m; the education sector £46m and the civil service £30m.

Right, time to sort it out.

And that’s the problem. Whilst 50% of civil servants work hard and take NO time off — there are professional malingerers who take this time off BECAUSE they can! Contrast their 10.6 days off with the private sector average of 4.5 days off.  Are those working in the private sector immune to the “stress and anxiety and depression” that seems to SO afflict their public sector equivalents? Of course they are and so this is — quite simply – a selfish bunch of public sector workers swinging the lead, as they say here, taking extra time off because they get away with it!

I will be up against a trade unionist called Bumper Graham (Great name btw) and as far as I am concerned, it is the Unions which carry serious culpability for this rip off. They control the public sector and oddly enough that is where the sick note culture dominates. Rather than face into it, and help bring sick days down to as close to zero as possible, they excuse it, they defend it.

There will be some straight talking tonight. To those who can tune in, touch that dial at 10.35pm and watch me in 3D!!!