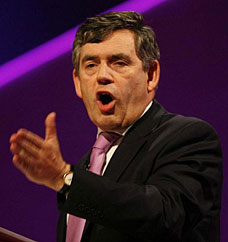 Let’s cut to the chase concerning the meeting between UK PM Gordon Brown and President Bush yesterday. Discussing the future of UK troops in Iraq Brown has told Bush he would not delay their exit in order to show unity with the United States. After four hours of talks with the US President at his Camp David retreat, Brown told a joint press conference he would make a Commons statement in October on the future of the 5,500 British troops in the Basra region. The Bush administration has been nervous that a full British withdrawal would add to the criticism. But Mr Brown made clear – and President Bush accepted – that Britain would go its own way, even if that gave the impression the two countries were diverging.

And that’s EXACTLY what Al Queda want to see. Divide and Conquer.

Brown has no stomach to FIGHT militant Islam, he would much prefer to find a way to instigate a conflict resolution process with them, involving financial aid no doubt. He does NOT get it in the way that Blair did. The Jihadists seek to cower us into splitting with our allies and Brown will give them what they want. This will give him excellent media headlines and expect those poll numbers to rise even further. Life will be good under Gordon – until the Jihadists strike again, and again….and then what? Brown makes me nauseous. When the US and UK SHOULD be totally united, he’s making a virtue out of the fact that he will make us separate.

9 thoughts on “SIDE BY SIDE BUT NOT UNITED….”