The State of North Carolina voted in a Conservative Govt. Both Houses and the Governor. Over the last 6 months they have passed sweeping reforms.

In the 2010 midterm elections, Republicans captured both chambers of the legislature for the first time in more than 100 years. They’ve since built veto-proof majorities and taken control of the governor’s mansion while lawmakers have pushed a conservative agenda on social programs, criminal justice, taxes, education, voting rights and other areas. 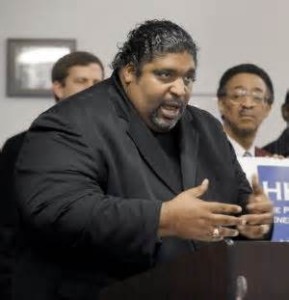 Since Mid-April the NAACP led by Rev William Barber, (he looks like he’s starving) and the SEIU, and the Teachers Union have laid siege to the capital in Raleigh. As the States budget is brought closer and closer to being balanced the bottom feeders are getting more and more unruly.

150 people were arrested as they stormed the Capitol Building. Bottom line is they refuse to let go of other peoples money. The Republicans are putting forth “a regressive agenda that neglects the poor”. It also hurts the children, teachers, and is racist etc etc etc…..

6 thoughts on “Speaking of Bottom Feeders”