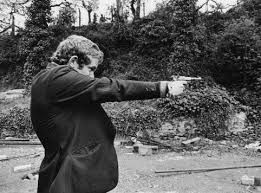 The family of an Irish police officer shot dead by the IRA has said Martin McGuinness is not a suitable candidate to be the country’s president. Detective Jerry McCabe was killed during an armed raid on a post office van in Adare, County Limerick, in 1996. In a statement, his family said Mr McGuinness should reveal what he knows about the killing and those of other Irish security force members.

Naturally, McGuinness tries to sidestep it;

“A great wrong was done to the McCabe family and the IRA has acknowledged and apologised for it,” he said. “I have never and would never stand over attacks on members of the defence forces and the gardai.”

Says the man whose IRA slaughtered members of the RUC, UDR and British Army.

The IRA sought to distance itself from the killing of Garda McCabe until it had no choice left but admit that yes, IT carried out the murder of the Officer.

“This election is as much about the moral duties of those who seek high office as it is about their vision for the presidency and Ireland’s future. “We want to move on and resume what passes for a normal life without a father and husband and brother. “We can’t move on if Mr McGuinness assumes he can aspire to the symbolic status of first citizen without first discharging the most basic responsibility of any citizen. “If Martin McGuinness cannot or will not assist the authorities with its investigations into the murders of police officers, soldiers and prison officer how can we expect the rule of law to prevail under his presidency?”

It can’t and he won’t. McGuinness cannot win this Presidency, his strategic reason for running is to advance Sinn Fein into Fianna Fail territory, if possible. However he has inadvertently put himself into the position where at last some light has been shone into his dark and wicked past. Small mercies and all that.

6 thoughts on “STILL DODGING THE TRUTH”