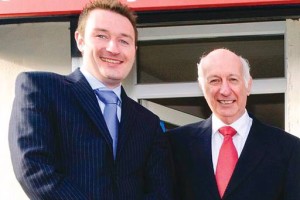 It’s been quite a week for the DUP, the leading party of troughery here in Northern Ireland.  We had Peter Robinson making patently FALSE allegations concerning Jim Allister; we had Ian Paisley working for a French Bank in Uganda at a time of a crucial Commons vote on Syria, and now this.

DUP member Robin Newton employs his wife Carole as office manager and his son Adam as researcher. They are currently paid a total of £60,831 a year. But the Belfast Telegraph has also discovered that the MLA for East Belfast paid his daughter Emma Ruth Newton – in either her own name or described as ERN Research Services – up to £13,780 for research and secretarial work for a year-and-a-half up until 2009.

As is carefully pointed out, there is nothing illegal or improper in this grotesque troughery. But, it reinforces my view of the motivating force behind so many of those at Stormont.