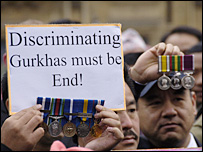 Can I just say that I FULLY support the demand from hundreds of retired Gurkhas to have the right to remain in the UK and pension equality with British soldiers? Gurkhas who retired after 1997 can automatically stay in the UK, but those who retired earlier must apply. Fifty of the Nepalese soldiers handed their medals to Lib Dem leader Nick Clegg in protest. Clegg told MPs ministers had made a "spectacular misjudgement", while the prime minister praised the Gurkhas. At prime minister’s question time, Mr Clegg demanded that all Gurkhas be given equal pay and pension rights as well as the right to live in the UK. Brown dissembled, as ever. These Ghurkas are true patriots and deserve what they are asking.  When you  considerer the hundreds of thousands of others that the British Government lets in, this nasty discrimination against the Ghurkas is disgraceful.

14 thoughts on “SUPPORTING THE GHURKAS”