A gang of thugs can’t even leave the homeless with their sleeping bags and food. 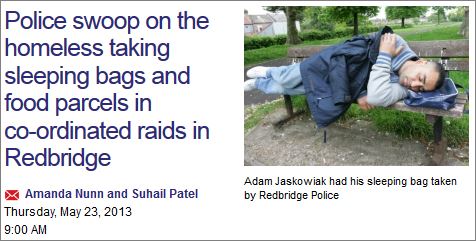 When you see government do something, it’s always important to ask yourself if it would be right, or acceptable, for you to do it also. If an act is wrong for you to do, then it’s also wrong for government to do.

If you or I forcibly took the food and sleeping bags from the homeless, we would be thieves and rightly condemned. Probably we would be prosecuted. That others get together and call themselves “government” does not mitigate the act. That the magic word “government” provides a shield of immunity for thugs and thieves is simply more evidence that “government” is intrinsically evil.

50 thoughts on “TAKING WHAT LITTLE THEY HAVE”