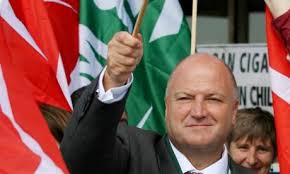 “Asked for his strategy for protecting jobs while tackling the deficit, Mr Crow told Channel 4’s 10 O’clock Live Show: “If groups of workers are under attack, we believe we should coordinate and stand firm – propose a tax of 1p per email, and get rid of Trident.”

It is not the first time that Mr Crow has suggested that the Government impose taxes on modern technology in order to pay down the country’s record budget deficit. In an interview with the Guardian newspaper last year, he said: “If you put a 1p tax on every text message that’s sent in Britain, that would nearly wipe out half the deficit”.

Who favours paying 1p tax on email? How about a 1p tax on text? The ramblings of a deluded leftist or enlightened progressiveness?