When the most powerful and vicious organised crime racket on the planet gives you a big job that you’d better not mess up, this is what your face looks like. 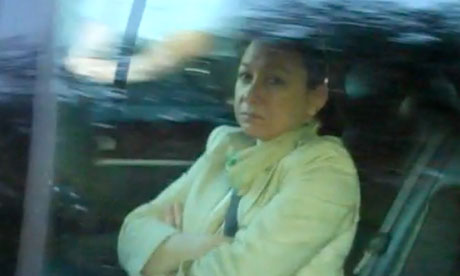 That’s Bassma Kodmani, head of the mysterious Syrian National Council, coming out of this year’s Bilderberg meeting the other day in Virginia. It’s the SNC which sprang up in Turkey with the Syrian uprising and which has been co-ordinating the Syrian opposition. The Guardian tells us who Kodmani is:

She looks a sad little puppet. I’d have thought she’d look happier, having had the hawks of Bilderberg cluck around her for the weekend, planning her new country. It’s no wonder they’ve taken Bassma under their wing. After all, she spent seven years at the Ford Foundation. She’s “one of them”.

Oh right. The Ford Foundation then, a CIA front group (the one where – coincidentally – Obama’s mother worked for Timothy Geithner’s father). So that’s what she is. We’ve noted previously that Assad is toast, then on the occasion of H. Clinton announcing that some powerful opposition force would arise “somewhere, somehow” and that they will “find the means to defend themselves as well as begin offensive measures.”

13 thoughts on “TAXI FOR ASSAD”