CDC: 1-IN-5 AMERICAN CHILDREN MAY HAVE MENTAL DISORDER

IGNORE EVERYTHING GOVERNMENT SAYS ABOUT FOOD

WHO CAN’T WE DEPORT TODAY?

Are you still paying for this trash? 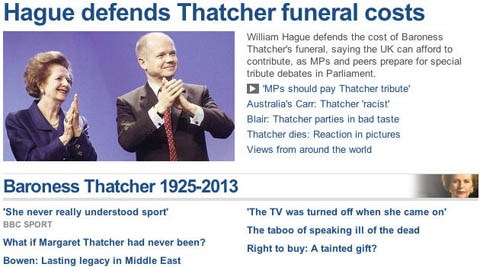 The state broadcaster wasted no time in becoming a vast national troller, filling the airwaves with every old Lefty they could drag up. I genuinely wish I had a TV Licence to burn.

They can’t even headline their online pieces faithfully. Look at that one “The TV was turned off when she came on”. This is the article. It was said by a woman whose mother hated Margaret Thatcher, who was horrified at the idea of a female Prime Minister and it was the mother who turned the TV off. If the daughter’s own opinion had been used for a headline it could have been “I remember the 1980s as an era of opportunity and prosperity and I was inspired by Mrs T”, or “Mrs Thatcher had strength and conviction and she will continue to be my inspiration.” Headline writers, however know that many people get an impression from headline-skimming and don’t always bother to click on articles. Typical BBC snide journalism: not lying, but still skewing reality.

Really, why are you still allowing these bloated communists to gorge on your labour? Stop acquiescing, say no, withdraw your consent.

What if Margaret Thatcher had never been? What when the BBC is no more, please. Make it happen.