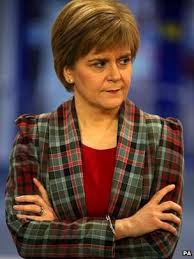 It’s inevitable that the neo-marxist SNP Government in Scotland would come after the property owners.

Nicola Sturgeon’s government has been urged to be far bolder on land reform after proposals to cap the amount of private land owned by one person or company were dropped.

The bill, published on Tuesday, makes a series of radical proposals to strip Scotland’s sporting estates, where deer and grouse are shot, of business rates relief and features measures to force landowners to sell estates to local people if their land is badly managed.

You may recall that Scotland has also BANNED Council house tenants from having the right to BUY their own property. Another pincer movement against those who want to OWN their own home.

I think the SNP realise that one of the first steps in imposing a Robert Mugabe style tyranny is to assault those who own property. It’s how you dismantle democracy and it is right up the SNP agenda!

4 thoughts on “THE ASSAULT ON PROPERTY….”