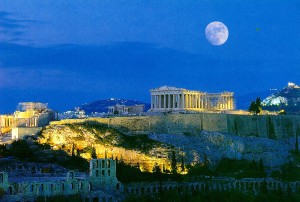 Remarkable story here which demonstrates simultaneously the desperation and guile that drives the EU.

“A decade after it gave up the drachma, the world’s oldest existing currency, Greece faced the crushing reality that it did not have the sovereign authority to meet the demand for paper currency from its own citizens. It could mint euro coins and there were also plates for the €10 note. But coins and small denomination paper were not going to satisfy the demand.

Only the German Bundesbank, the National Bank of Austria and the Luxembourgers have ever had the plates for the highly prized €500 note, the highest-value paper currency in the world. (This form of manufacturing would appear to have been confined to German-speaking countries. Mmmmm…) Intentionally or not, the ability of Greece to meet a huge surge in demand for banknotes had been effectively proscribed.

By June 2012, Greek demand for paper currency had nearly trebled and amid last summer’s electoral tumult, the secret missions started in 2011 were once again required. The response was extraordinary. While issuing public threats to Greeks, in private the Troika authorised military and commercial cargo planes to feed them euros – billions-worth on every flight. They were intended not only to preserve Greece’s fracturing social stability, but also to preserve the single currency itself”

What madness! And what utter humiliation for the Greeks, not that they see to have any shame left. Greece remains in the debt mire and it has been indicated it needs a THIRD  billion euro bailout, so stuffing euros into aircraft and surreptitiously flying them to Athens only deferred the day of reckoning. As Ian Dury once sang – what a waste!

2 thoughts on “THE GREAT ATHENIAN AIRLIFT…”