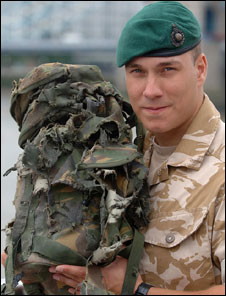 I am conscious that I do not want ATW to be seen as a site that always complains about things and never expresses appreciation. So I wanted to bring you this story about a Royal Marine who threw himself on a grenade to save his comrades’ lives and who is to receive the George Cross.

Lance Corporal Matthew Croucher, 24, from Solihull, in the West
Midlands triggered a trip wire in Helmand Province, Afghanistan, in
February. He immediately dropped to the ground and lay across the grenade, being blown into the air as it went off.  The George Cross is one of the highest decorations that can be awarded for acts of gallantry. L/Cpl Croucher said: “All I could do in the moment was shout out ‘grenade’ before diving on top of it.” His bag was crammed with equipment which cushioned the
explosion. His three comrades suffered just cuts and bruises while
L/Cpl Croucher was thrown in the air.

Amazingly Matthew did not die, or even suffer severe injuries. In that moment, when he realised that the grenade was to detonate most likely killing him and his colleagues, he acted in an incredibly courageous manner. I salute him, you too I hope – he typifies the BEST of British.

41 thoughts on “THE BEST OF BRITISH…”