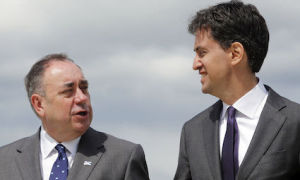 For many decades, the Labour Party has taken for granted that Scotland will provide it with dozens of MP’s. Currently, this sits at 41. But recent polling suggests a total meltdown as the uberleft SNP experience a massive resurgence in popularity.

Ed Miliband faces humiliation in Scotland after a poll revealed Labour could be left with just three Scottish MPs after next year’s general election. The Scottish National Party is now on course to secure more than 50 seats in May, meaning Alex Salmond could hold the balance of power at Westminster. Such a dramatic collapse in Labour’s support in Scotland could easily offset any gains made in England and Wales and destroy Mr Miliband’s hopes of getting into Downing Street.

The irony here is that the SNP surge may well deny Miliband any chance of a majority at Westminster BUT the SNP could then offer some sort of informal “understanding’ (short of a pact) that would allow Miliband to govern as a minority government.

This might just be what the UK needs to produce a real revolution as it means that the vast majority of ENGLISH voters will be essentially ignored. That cannot pass but it may ensure a massive vote in 2020 that will then restore the greatness of our country and banish the Left. Then again, if UKIP make the inroads I expect (and into LABOUR as well as Conservative heartlands) I suppose a Conservative/UKIP coalition becomes possible. However one looks at it, 2015 is going to see a seismic shift in UK politics and that alone should prove most interesting to watch!

130 thoughts on “THE DEATH OF LABOUR IN SCOTLAND…”