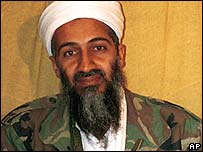 It is revealed today that Ministers in the British Government insisted that British secret agents would only be allowed to pass intelligence to the CIA to help it capture Osama bin Laden if the agency promised he would not be tortured, it has emerged.  MI6 believed it was close to finding the al-Qu’eda in Afghanistan in 1998, and again the next year. The plan was for MI6 to hand the CIA vital information about Bin Laden. Ministers including Robin Cook, the then foreign secretary, gave their approval on condition that the CIA gave assurances he would be treated humanely.

Give me a break. Had Bin Laden been captured, and been physically tortured live on prime time TV, if that could have gained the intelligence to stop  the awful atrocity on 9/11, it would have well been worth it. Being nice to Mr Bin Laden, treating him decently and kindly, is absolute nonsense. This man delighted in planning the mass murder of innocents all around the world – and yet ALL the self righteous shills in the Labour Government could do was concern themselves about poor Mr Bin Laden.