It’s been a long time since anything that happens here in Northern Ireland politics surprises me;

Finance Minister Arlene Foster has said she intends introducing her new budget in the assembly next Tuesday. She gave a paper on the details to the other Executive parties last Friday. The plan, drawn up on the basis that welfare reform has been agreed, has become known as the fantasy budget.

The DUP minister says the Stormont finance committee will this week consider a request to give the budget bill accelerated passage through the assembly. This is in the hope it receives Royal Assent by 31 July. Asked if she believed Sinn Féin would agree to the proposals she said “I don’t know, that’s a matter for them.”

The Secretary of State has said it would be “helpful” if Northern Ireland politicians could agree a provisional budget.

Meanwhile, back in reality…

The Stormont administration is facing a multi-million pound shortfall due to the continuing failure to implement welfare reforms.

This is not Good Government. It’s not even bad Government. It is just plain chaos presented to us as if it were controlled management. I suggest Stormont adopts a new motto…. 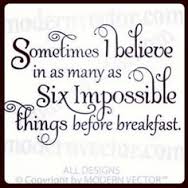