I was on the BBC this morning discussing the idea put forward by the government quango N.I.C.E. that the NHS should bribe fat people to eat less.

In essence, I object to this for three main reasons;

1. It rewards the irrresponsible. That’s wrong. People KNOW obesity is bad for you. Yet they keep eating. It is a form of greed and denial that drives this in many cases. I don’t think Stephen Nolan liked it when I said this, and I did not mean to hurt him., But it’s true.

2. It treats adults like kids. Nanny State not only assumes responsibility for the feckless but pays them for it! Adults are responsible for how much they eat, not the State.

3. There is no coherent economic argument in favour of this. This wastes resources and is pure frippery. 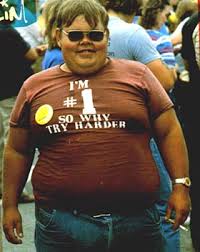 N.I.C.E. also currently denies those suffering from certain types of cancer life improving drugs. It sickens me that on the one hand it denies funding to those who through no fault of their own need help and instead offers it to the fat of the land.

I did make the the point that it is a NATIONAL HEALTH SERVICE, not a NATIONAL LIFESTYLE SERVICE, but I don’t know if that point was picked up.

I suggested that many of those that are obese are in this position because..gasp…of greed. That didn’t go down well, but I am sure that this is true. Yes, there may be some with other complicating factors but on the whole the maxim remains that you should eat less and exercise more. This might not work for all but it will for most.

You can hear the debate on the Listen Again link here, I think it starts about 35 minutes in.

PS. I loved the nutter who phoned it to complain the BBC had me on. I run a “right wing website” with is nasty to Islam, apparently. Who knew? Fair play to Stephen for cutting him off. Great to see the fan club out so early on a Monday.