The birth of a ‘Nation’?

Oh to live in this ‘age of austerity’

‘goes around, comes around’

Anything You Can Do …

ATW Public Service Announcement – Keep It To Yourself

Writing about political events on a daily basis, it is easy to become all too cynical about the condition of human spirit. After all, politicians in many ways represent that which is worst in the human condition; conniving, lying, selfish, vain, you name it, you’ll find it in politicians. (Yes, I know they are not ALL bad, but most are, believe me!) 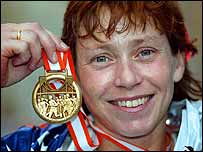 But today I wanted to express my OWN admiration for Jane Tomlinson who has just died aged 43, following a seven-year battle with terminal cancer. The married mother-of-three, who was made CBE for charitable services in June, had raised £1.75m in a series of gruelling challenges. She died at St Gemma’s Hospice in Leeds at 2100 BST on Monday.  Her husband Mike and children Suzanne, Rebecca and Steven said they were heartbroken but "honoured to have been blessed with such a wonderful person". Mrs Tomlinson, of Rothwell, Leeds, was told in 2000 her metastatic breast cancer was incurable and that she had just six months to live. She then dedicated her life to raising money for charity, going on to complete a number of fundraising challenges, including the Great North Run, London Marathon and the Ironman UK Triathlon.

Jane Tomlinson demonstrated how the human spirit can triumph even in the face of certain death. What a brave lady she was and I am so sorry for the tremendous loss her family must feel today. I think that we can all take inspiration from the fact that where there is a will and determination to do good things and to make a real difference to our fellow men and women, there is also a way. Jane represented the goodness that lies  within us all.

14 thoughts on “THE GOODNESS IN THE HUMAN SPIRIT…”