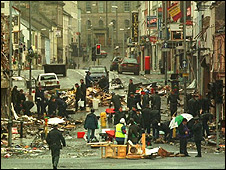 I’m sure like many other people here in Northern Ireland and indeed around the world, mention of the word "Omagh" brings back memories of that dreadful day back in 1998  when vicious republican terrorists set off a bomb in that County Tyrone town killing 29 people in the most horrific way possible. In a court case today is was revealed that one of the Omagh bombers grinned as the car carrying the device was parked at the scene. A woman who caught his eye also claimed he looked calm and relaxed.

Grinned. Calm and relaxed. Just as carnage was about to unfold –  and so many families were about to tragically lose loved ones with devastating effect!. I believe there IS such a thing as evil and its grinning presence stalked Omagh on that awful day. Justice will only be seen to be done with the men who planned and executed this crime have their liberty taken away for the rest of their natural lives.

One thought on “THE GRIN OF A REPUBLICAN KILLER…”