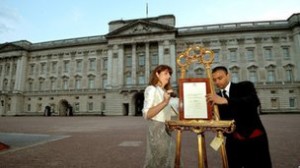 You have to smile at the sheer small mindedness of it.

Northern Ireland’s First minister has congratulated the Duke and Duchess of Cambridge on the birth of their son. Peter Robinson said he wanted to extend his best wishes to them on behalf of everyone in Northern Ireland. “I was honoured to attend their wedding and I wish them every health and happiness in the next chapter of their lives together,” he said. ‪

The Duchess of Cambridge gave birth to a boy weighing 8lb 6oz at 16:24 BST on Monday at St Mary’s Hospital in London.

So, was Peter the Punt speaking on behalf of his co-First Minister and former IRA godfather, Martin McGuiness? Do remember that EVERY statement issued by the Office of First Minister has to be approved by the Deputy First Minister! Well, here’s what Marty had to say….

On Monday night the deputy first minister said there had been some interest in his thoughts on the Royal baby. “I extend warmest best wishes to all parents and new babies born today. “God bless them.”

Note the evasion wrapped up in provo piety.  He couldn’t bring himself to express DIRECT best wishes to Kate and William on the birth of their son so instead he mouths empty platitudes to ALL new parents. Also invoking God’s blessing seems an odd thing to hear from a man whose terror group showed blatant disregard for the Commandment “Thou shalt not kill”

39 thoughts on “THE OFM MINUS THE DFM”