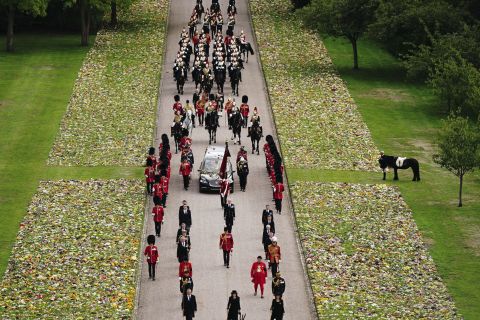 At this time of our national mourning, I wish to write not of our late Monarch, but of the overbearing role of the Government and Police; as opposed to the British public, in our Four Nations. This decline can best be illustrated by photographs: The first is a photo of the queue which was formed to view the late Sovereign’s King George the 6th Lying-in-State: the second is of the new Queen’s Coronation procession, and the third is the heavy-handed attitude of our own version of the Stasi.

The decline, as I and many others see it, is mirrored in the passage of seventy years, and in our loss of personal freedoms. When the late King died, we did not need a massive system of corralling the thousands who wished to pay their respects to their late King. We did not need a host of uniformed nonentities, all wearing those fairly silly fluorescent yellow vests, all proclaiming, “We are your masters! You WILL do as you are told,” as was all so very, very obvious; during those five amazing days and nights when over four hundred thousand ordinary people chose to pay their respects to their late Monarch.

The queue to view the late King George’s Lying-in-State was just over 300,000 strong, possibly less in number that for the Queen; but they had queued, six and eight deep, for over four miles in freezing rain and snow, without any more security than the occasional policeman, caped against that same wind and snow, passing calmly by, with no bloody yellow vest to blare out that he was the BOSS, no barriers at all because it was unthinkable to even accept that it was possible that someone might jump that most British of institutions: the Queue.

When the cortege of King George was solemnly moved through the streets of London, there were no crowd barriers, no mounds of steel between the crowds and the procession. We, as a Nation, were trusted to know what was right, and what was proper. The serried ranks of military personnel and police, lining the route of both the Funeral, and the following Coronation of Elizabeth, faced towards their Monarch, knowing that we, the British people, were there behind their ranks because we were British, and they instinctively knew that we could be trusted not to sully a solemn occasion with any political slogan, or any attempt to interrupt or defile a solemn Constitutional ceremony: because, again, we were British, and knew what was expected of us.

But time has passed, and times have changed. Through the true lunacies of almost mass immigration from parts both near and far, of a seeming paralysis of right-wing political will as against a deluge of liberal and left wing philosophies, we, as a Nation seem to have been enveloped simultaneously with a fog of semi-dictatorial Nanny-State ideals, and a wholesale disregard for the liberties and freedoms which had been fought to preserve through four centuries; and two World Wars. We seem to have been demoted, both in our basic freedoms as subject of the Crown, and to be told that, if we desire something, and that desire is upheld by a Court’s decision: we have to accept that that decision can be overruled by a bloody Politician’s ability to annul that same decision. The funny / strange part of THAT decision, which was to deliberately annul a Court’s decision, received no publicity, no strong denunciation, no  strongly worded editorials or commentary pieces. Absolutely sweet **** All!

I believe that those changes of which I write can be seen within the arrangements which surround that Funeral Ceremony which I watch as I write these words. I really did appreciate the fact that “Sleepy’ Joe Biden, and his ‘Doctor’ wife, were relegated to the 14th row of the ‘Foreign Dignitaries’ section of the Abbey seating. The Government had invited all the leaders of the Nation States with which we have diplomatic arrangements, and this had, originally, included Mohammed bin Salman (’MBS), the Crown Prince of Saudi Arabia. But, upon learning of this invitation, ‘Activists’ who were ‘SURE’ that MBS had been a centre part in the decision to kill a Journalist, set up moaning and groaning, to the extent that the invitation had to be modified so that another Saudi royal was named in MBS’ stead. Even North Korea’s Ambassador was invited. So why give in to a bunch of snivelling bloody activists.  In my time, things and occasions were just a little more robust. If these piss-willy so-called ‘activists’ had complained about the ruler of a country with whom we did a great deal of legitimate business; when I was much younger, they would have been told, possibly in sharp tones, to ‘Eff Off’ and don’t try anything: otherwise you are straight into the slammer, and it will not be a pleasure cruise.

I end with a few words on the actions of the various Police Forces, or Services, or whatever the updated bloody buzz word is for our own version of the Stasi. I watched closely for all of the procession, into the Abbey, and out once more, the gun carriage moving to the Wellington Monument, and the transfer to, the hearse for the sad trip to Windsor. Almost without exception, those policemen and women faced the crowd over those doubled steel barriers, and over the journey to Windsor, there were crowds so thick that they could not be counted. What were they all on the watch for? Did we hide, amongst the solemn clapping, a squadron of strangely British bloody jihadis, all aching to destroy themselves as a protest against the solemnity of a Constitutional Monarchy changing seamlessly from a dead Queen to a living King? Nope, we were the common threat, because we are still an unruly lot, and we might, just might, scrag a few ‘woodentops’; just for the sheer, uninhibited joy of having a punch up with the 2022 version of the Heavy Mob!

On that point, looking at those crowds, from the Mall to Windsor, they were overwhelmingly white? Bit chilly for all the fuzzie-wuzzies?

4 thoughts on “The Police turned their backs upon their Sovereign.”