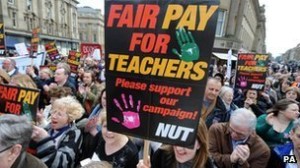 One of the greatest impediments to a decent education system for children is … teachers. And in particular their self serving greedy anachronistic Trade Unions;

“The two biggest teachers’ unions are gathering for their annual conferences, where they will challenge the government over pay, Ofsted inspections and England’s academy schools. The NUT and the NASUWT have already announced joint strike plans over pay, pensions and workload. There is also likely to be a no confidence vote in Education Secretary Michael Gove. The Department for Education has said it is “disappointed” by the strike.”

Disappointed, perhaps, but not surprised.

The teaching “profession” is overpaid and underworked.

The teacher unions insist on keeping poor teachers in jobs so ruining the chances of tens of thousands of children.  The best thing to do would be to break these rancid unions and allow teaching excellence to flourish and be rewarded whilst weeding out the mediocrity that the TeachingUnions guarantee.