Like all great parasites, John Bercow loves to criticise people who do productive work for their income. The troughing Speaker, back in his Romanian homeland, stuck the knife into people forced to make him wealthy under the threat of violence, derided the work ethic of the British people, and promoted their invasion by aliens. 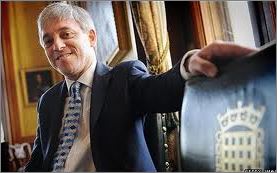 Eastern European immigrants to Britain show more “aptitude and commitment” to work than British people, the Commons Speaker has said.

In remarks that have raised questions about his political neutrality, the Speaker also attacked British critics of recent trends in immigration for their “bellicose and strident tone” […] In remarks on a visit to Romania last week, Mr Bercow appeared to give his support for policies that have allowed eastern Europeans to travel to Britain and work.

Bercow is as he is. He’s a creep and a parasite imbued with all the arrogance self-righteousness of the politician who knows he never has to serve his fellow man or please a customer to pay a bill. Voters had the chance to kick his arse out at the 2010 General Election when Farage stood against him. Almost 23,000 Tory drones gave him a thumping majority. Like the liberal Tories, Bercow then insults and abuses them like a Romanian farmer whipping his cattle. Idiots.

69 thoughts on “THE REPELLENT BERCOW”