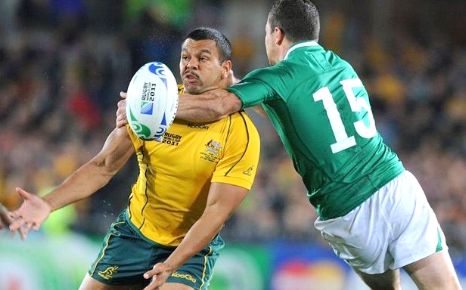 Did you see it? What a game that was, and what an effort by the Irish pack. The tight five were monstrous. Cian Healy, Rory Best, Mike Ross, Donncha O’Callaghan and Paul O’Connell, take a bow. Shoving from behind, Sean O’Brien was massive while Stephen Ferris provided the moment of the World Cup so far when he picked up Will Genia and ran him back over the Aussie 22 line. Top stuff.

Remember, this is a well fancied Australia team with an all star backline, and the Irish gave them a biffing, reminding the rugby world that it doesn’t matter how good you are if you can’t get the ball and a bunch of fat boys run over you when you do. The All Blacks might have bagged 198 tries against Japan the other day and there weren’t any tries in this game but was dull choreography while this was genuinely great stuff. I just wonder where this team goes for most of the year. They took up from where they left off aganst England back in March. Since then Ireland has lost every game. Declan Kidney ought to tell them they’re playing England or Australia more often. It was Northern Hemisphere rugby at it’s best: biff’em, win the ball, biff’em again, run over’em, biff’em again and .. ah go on Paul, biff’em again. What fun over the bacon and eggs.

Right, off to a wedding. Must behave.

21 thoughts on “THE SCARY GREEN MONSTER”