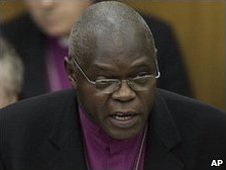 Interesting to see just how rotten from within the Church of England has become – a whitened sepulchre to borrow a phrase.

“The Archbishop of York Dr John Sentamu has told the Church of England’s synod meeting in London taxes would have to increase in order to help those worst affected by the recession.

He said Britain had “worshipped at the temple of money” as if it were a God. Last year Dr Sentamu described bankers and financial speculators as “robber barons and asset strippers”. He told the General Synod the operation of financial markets would need reform, but the most urgent need was to help those “at the sharp end” of the crisis. “Though I really don’t want to get into the detail, surely if the plan is to redistribute money gained from inheritance tax, then taxes would have to be raised to meet the deficit in the public spending budget.”

1. Tax is fundamentally theft and redistribution of wealth is code for Marxist theft. It is wrong.

2.  The deficit in the public spending budget has a VERY simple answer. Cut the public sector!

Heavens above but Sentamu’s socialist warbling is just embarrassing.

7 thoughts on “THE SOCIALIST CHURCH OF ENGLAND…”