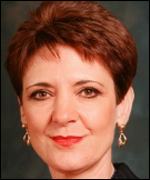 I see that Iris Robinson, wife of new DUP Leader and soon to be new First Minister Peter Robinson has been hitting out at British government "smear stories." It appears that malicious stories suggesting that she was beaten by her husband Peter were put about by sources within the British government back in the days when she and Peter opposed government policy.

Can’t say I am surprised at this – the Northern Ireland Office is full of vipers after all. However, I wonder if Iris has really thought this one through? I mean, if the government was able to do what she suggests and use it’s media clout to put about false stories smearing her and Peter when they held the wrong kind of views, is it at all possible that government might use exactly the same influence to put about equally false stories praising them for their new found courage in now holding the right kind of views?

I also note that Iris wanted to hold a Ministerial position in the Paisley-created Executive – clearly being an MP, an MLA and a Councillor with all the associated salaries was not enough for Iris. She just wants to do good. Right.

5 thoughts on “THE SWIZ FAMILY ROBINSON”