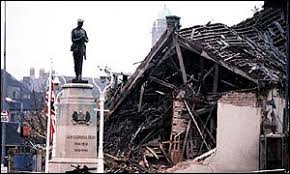 One of the problems about elections is that they provide the unscrupulous with the opportunity to say whatever it takes to get elected. Now this is true of most political wannabes but when the prize is that of the Irish Presidency, the lies get greater, much greater.

Irish presidential candidate Martin McGuinness has said he felt ashamed when incidents, such as the Enniskillen bombing, were carried out in the name of Irish republicanism. Mr McGuinness said the 1987 bombing, in which 11 people were killed at the Cenotaph, was atrocious. He also denied he was a senior figure in the IRA at the time.

Meanwhile, back on planet Earth…

Mr Taylor told the News Letter that it was victims of the 1987 bomb who had alleged to him that Mr McGuinness was involved when he was filming for the documentary last November. “They first raised Martin McGuinness with me and I then went away and spoke to intelligence sources,” he said. “All sources, both north and south of the border, came up with the same thing – that Martin McGuinness was the leading figure in the IRA’s Northern Command at the time.” And in the programme, PSNI Detective Chief Superintendent Norman Baxter said that Northern Command knew about the plan to bomb the Remembrance Day service.

So, if McGuinness knew about it, WHY did he not stop it? The answer is because this is a cold blooded killer and his sense of right and wrong is missing. He is saying whatever it takes and the lies mount up by the day. Is THIS what Ireland seeks to represent them internationally? He is right to feel shame but then he immediately lies and seeks to put distance between himself and the reason for that shame. Let him feel abject shame for what his IRA did on that dreadful day in Enniskillen. First step. Now let him admit culpability and make himself amenable to justice. He won’t because that is the route to prison, not the Aras.

8 thoughts on “THE THINGS THEY SAY!”