Trump Meets With Students and Parents About School Shootings 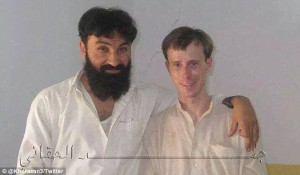 Bowe Bergdahl. Remember him? He’s either the soldier who was detained by the Afghanistan Taliban, suffering through almost five years of captivity before being released; or he’s the deserter/traitor who both supplied detailed information on his own camps and compatriot soldiers which gave Taliban attackers a distinct edge, as well as snuggling up to a smiling senior Taliban who seemingly ‘befriended’ him. Remember his folks, who had to be dragged off the White House pathway, because the ‘Dad’ wouldn’t shut the ***k up about his wonderful creepy son, and of course  some bloke named ‘allah’

Well, it seems he wants to move on with his life, and go to college.

Just imagine his choice of courses at the enrolment:-

How to keep a straight face whilst lying through your teeth.

The benefits of memorising the whole of the Koran, to the exclusion of everything else in literature, in the arts, and of course in forgetting that you were born a free American.

The wisdom of attempting to apply Sharia Law within either the US Army, or the United States, (students must be prepared to give living examples)

One thought on “The two faces of Bowe”