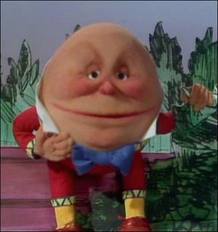 The advance of the gay agenda manifests itself in increasingly bizarre ways;

Education Secretary Michael Gove yesterday declared war on the ‘utterly outrageous and medieval’ use of the word ‘gay’ as an insult.

He will study current laws to ensure they are ‘properly policed’ and could even ‘sharpen’ them in a bid to stamp out offensive homophobic language. Mr Gove told a conference held by pressure group Stonewall that the Coalition was determined to protect gay pupils from being subjected to homophobic bullying at school.

Why should the word “gay” be afforded such special protected status, exactly? Isn’t language something that is open to use, interpretation, innovation? If we are not going to start using the LAW to outlaw the use of certain words in given contexts, I feel we are on the way to rampant totalitarianism, of the sort Orwell forecast.

I am reminded of this exchange from Alice in Wonderland;

4 thoughts on “THE WAR ON LANGUAGE…”