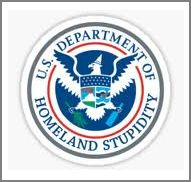 It’s taken ten years and a few  trillion bucks, but the Department of Homeland Stupidity has finally nabbed a dangerous terrorist out to destroy America. Oh yes.

Leigh Van Bryan, 26, was handcuffed and kept under armed guard in a cell with Mexican drug dealers for 12 hours after landing in Los Angeles with pal Emily Bunting. He was nobbled for tweeting that he’s on his way to “destroy” America and to dig up Marilyn Monroe. Despite telling officials the term ‘destroy’ was British slang for ‘party’, they were held on suspicion of planning to ‘commit crimes’ and had their passports confiscated.

Emily Bunting said: ‘The officials told us we were not allowed in to the country because of Leigh’s tweet. They wanted to know what we were going to do. ‘They asked why we wanted to destroy America and we tried to explain it meant to get trashed and party.

The awesome stupidity of those defending America at LAX is truly impressive, but there’s something else here. The tweet was posted well before the pair travelled. (Presumably) DHA computers picked up the phrase “destroy America” and the terror masterminds were already as good as done for. So watch what you type, because there is someone watching.