Not even I thought the Labour Party could be this witless.

Forget that these posters are a waste of money because they go viral and are turned against the originators within minutes of them going online, the illuminating thing is this; they actually think portraying David Cameron as Gene Hunt would turn voters off the Tories. 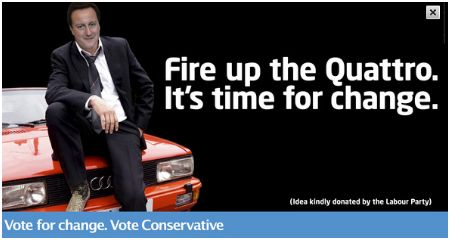 Talk about being out of touch. Gene Hunt is TV’s greatest copper since Jack Regan, an unreconstructed, foul-mouthed sexist who takes us back to pre-Marxist times, when men were men, we could speak freely and coppers were sticking a slag’s head down the pan instead of having to attend diversity workshops. If Cameron had one ounce of the Gene Hunt character he’d be assured of a landslide.

I see it was the idea of a 24 year old Labour supporter in response to a call from a skint Labour Party for campaign ideas. Good grief, you can just picture him. Twenty four years old and Ed Balls is his hero, probably. The kind of person who thinks millions of us tune in to watch Gene Hunt each week out of disapproval.

8 thoughts on “THIS JUST IN, FROM ANOTHER PLANET”