A Petition with a difference

If you bomb us, shall we not bleed?

LEADING FROM BEHIND AND OVER THE CLIFF 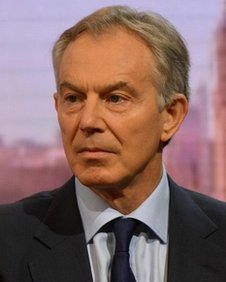 I was intrigued to read the thoughts of Tony Blair on the Syrian situation;

Protracted difficulties following the invasion of Iraq made the UK “hesitant” to intervene in Syria, former Prime Minister Tony Blair has said. In a BBC interview, Mr Blair played down the influence of the failure to find weapons of mass destruction in Iraq on the UK Parliament’s decision to block military action in Syria. Iraq had shown that interventions can be “very difficult”, he conceded. But Syria, left unchecked, could become a potent source of extremists, he said.

I think there is little doubt that post-Iraq, the UK public has lost the collective will to engage in foreign wars. Blair carries some considerable degree of culpability for this breakdown in the public psyche since it was his spinning back in the lead up to Iraq that did no favours at all to what was – (in my view then and now) – a righteous cause (Saddam needed toppled). However it is the final statement from Blair that leaves me stunned.

” Syria, left unchecked, could become a potent source of extremists..”

COULD? The “rebels” that Blair, Obama, Kerry, Cameron, Hague and Hollande seek to help ARE extremists! There is a strong Al Queda element to those seeking to overthrow Assad. It doesn’t come anymore extreme than that. I just do not understand what Blair is saying.  Here are the “moderates” at play in Syria… 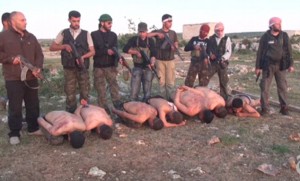 I have said it before and I will say it again, we have no dog in this fight, let Allah decide!

24 thoughts on “THROUGH THE LOOKING GLASS…”