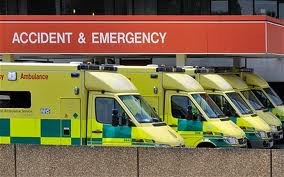 Accident and Emergency provision is essentially a monopoly within the NHS. If you fall and break your arm, it is where you have to go. If you are in a car accident, it is where you are taken. All in all, it is a crock. I have experienced it with my own family and found it is the lowest common denominator level of service. Yes, they will fix you up but it is done pretty poorly and the level of care in A+E is a shocker. My mother is currently in hospital, again, taken in through A+E and it is a grim business. They do the basics, and I know they have much to cope with given the tsunami of eastern europeans now demanding free treatment, but they do it pretty bady and in terrible conditions for the patient.

Levels of demand on NHS accident and emergency departments in England have been described as unsustainable by the head of the health service regulator. Care Quality Commission chairman David Prior said there was no guarantee that another disaster like that at Stafford Hospital could not happen in future. Hundreds of people are thought to have died after receiving poor care there.

If the NHS departments cannot cope, as is being stated here, and thousands of people may needlessly lose their lives as a consequence, then isn’t it time that this function was put out to the private sector? Billions are taken from the taxpayer every year to supposedly fund the NHS and A+E within it and if, as seems to be the case, this is just not enough to feed the beast, then starve it and put out provision of service to those more capable of delivering it.

4 thoughts on “TIME TO AXE NHS”