It’s now a race to see which New Democrat can skate on the biggest lie. 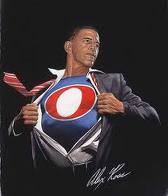 Obama Would Have Left if Wright Stayed
White House hopeful Barack Obama suggests he would have left his Chicago church had his longtime pastor, whose fiery anti-American comments about U.S. foreign policy and race relations threatened Obama’s campaign, not stepped down.

Yeah, right. And I’m the high rabbi of Mecca, Medina and Riyadh.

“Had the reverend not retired, and had he not acknowledged that what he had said had deeply offended people and were inappropriate and mischaracterized what I believe is the greatness of this country, for all its flaws, then I wouldn’t have felt comfortable staying at the church,” Obama said Thursday during a taping of the ABC talk show, “The View.” The interview will be broadcast Friday.

In his sermons over the years, the Rev. Jeremiah Wright has railed against the United States and accused it of bringing on the Sept. 11 attacks by spreading terrorism. He also has said the government invented AIDS to destroy “people of color” and has shouted “God damn America” for its treatment of minorities.

Videos of his remarks circulated on the Internet and on television.

In an attempt to quiet the controversy, Obama gave a speech last week in which he sharply condemned Wright’s remarks but did not repudiate him.

Obama said Wednesday he has spoken with Wright, who retired from Trinity United Church of Christ last month but remains as a senior pastor.

Amazing. Absolutely freakin’ amazing. It seems that Obama has no problem with Wright’s status of ‘retired’ but remains as ‘senior pastor’. But, as a lieyer (Harvard Law, ’91), Obama’s well-versed in the art of double-speak.

Hillary Rodham Clinton, Obama’s rival for the Democratic presidential nomination, broke her silence on the matter Tuesday, saying she would have parted company with a pastor who spoke about the country the way Wright has.

If this crock o’ shit doesn’t blow up in Obama’s face, the RINO just might be in trouble come November.