GIRLS ROCK OUT WITH THEIR GLOCK OUT

RIP Hope Bourne, a truly remarkable lady who has passed on aged 91.

There’s little more admirable than living your life to your own satisfaction. Hope Bourne – farmer, hunter, angler and trout tickler, journalist, author, artist and a fine example of keeping yourself to yourself – did exactly that. For most of her life she lived alone on the wild and glorious Exmoor being almost entirely self-sufficient in that primeval place.

In 1979 Daniel Farson interviewed her for The Sunday Telegraph Magazine. She told him: “I have never taken a penny from public money. Friends tell me I could live better on National Assistance, or whatever they call it now. Over my dead body! 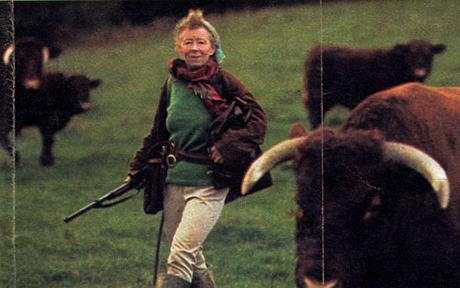 Hope Bourne once declared: “I’m bloody-minded. My independence is the most important thing in the world to me: freedom and a vigorous outdoor life.”

Convinced that the wildness of Exmoor can teach self-reliance, she lamented the proliferation of paths and signs, which prevented people from finding things out for themselves. She further believed that hill farming and the hunt (which she followed on foot) had been the backbone of Exmoor life, and mourned their passing.

Freedom and a vigorous outdoor life; what else does anyone need? For the rest, the genuinely wild places places are precious enough in these islands without National Trust busybodies turning everything into an “experience” with their visitor centres and guided walks. They’re even asphalting a track up Snowdon for goodness sake. It’s a mountain!

So farewell then Hope Bourne. If I were born sixty years earlier she’d have made a fine wife.

26 thoughts on “TO THE GREAT CARAVAN IN THE SKY”