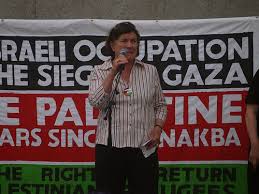 I see that Baroness Jenny Tonge has resigned the Lib Dem whip in the House of Lords after refusing to apologise for claiming that Israel would not “last forever”.

The Liberal Democrat peer, who once said she would consider becoming a suicide bomber if she were Palestinian, was roundly criticised for the remarks. According to reports on the Guido Fawkes blog she quit as a Liberal Democrat peer after refusing an ultimatum from Nick Clegg to apologise or resign. Speaking at an event at Middlesex University last Thursday, Baroness Tonge said Israel would one day lose the support of the United States and would then “reap what they have sown”. “Beware Israel,” she said. “Israel is not going to be there forever in its present performance. One day the United States of America will get sick of giving £70 billion a year to Israel.

Jenny Tonge, lest you have forgotten, is the same Liberal-Democrat speaking in 2004 on the topic of Palestinian suicide bombers who remarked;

“If I had to live in that situation – and I say that advisedly – I might just consider becoming one myself.”

My only hope is that her wish is fulfilled one day.

She DOES she to have a problem with Israel, though.

Tonge said in 2006: “The pro-Israeli lobby has got its grips on the western world, its financial grips. I think they’ve probably got a grip on our party.”

Right. So the Jews are running the world, gotcha.

On 12 February 2010, she was sacked by Liberal Democrat leader Nick Clegg after lending credence to allegations of organ harvesting by Israeli Defence Force medical teams after the 2010 Haiti earthquake by suggesting an independent inquiry should be established.

33 thoughts on “TONG IN MOUTH DISEASE…”