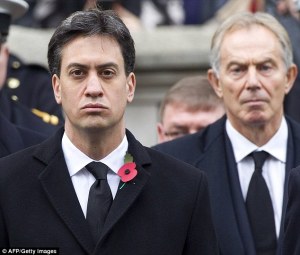 As you know, 2015 will bring the UK general election. Tony Blair managed to win THREE of these in a row. He was a triangulator, he posed as a centrist and convinced many on the right that he could be trusted. (more fool them). But he doesn’t trust the current Labour leader to win..

“Tony Blair has issued his most withering assessment of Ed Miliband to date, suggesting he has turned Labour into a ‘traditional Left-wing party’ and predicting he will lose the general election. The former prime minister indicated he thought Mr Miliband had deserted the political centre ground, leaving the Tories likely to win. In a thinly veiled swipe at the Labour leader’s approach to business, Mr Blair said winning elections was about ‘not alienating large parts’ of the business community.”

Blair is simply stating the obvious. But Miliband is a creature of the LEFT, put in place by the trade unions, and he lacks the charisma and skill that Blair possessed. Miliband looks like a loser, he talks like a loser and I pray he will be a loser next May.

7 thoughts on “TOO LEFT TO WIN RIGHT?”